Not all Peruvians speak Spanish!

You have a Limited English Proficiency (LEP) client from Peru.
So you need a Spanish interpreter, right?

Only about 84% of the Peruvian
population speaks Spanish!

Okay, so the LEP doesn’t speak Spanish well and prefers an interpreter in an indigenous language from one of Peru’s regions.

But even knowing the region from which your client comes from does not guarantee a linguistic match. There are more than 15 defined linguistic families in Peru’s territory and another 15 or more language families that are isolated or not classified.

Historians estimate that during pre-colonization, there could have been as many as 300 to 700 languages in the territory! Since then there has been a sharp decline in the number of indigenous languages spoken due to mixing of languages, colonization, discrimination, and a period of government-imposed Spanish (in an effort to unite the people).

Today there are less than 150 identified indigenous languages.

So your LEP is from the Andean Highlands?

They are likely (but not guaranteed) to speak one of these common languages: 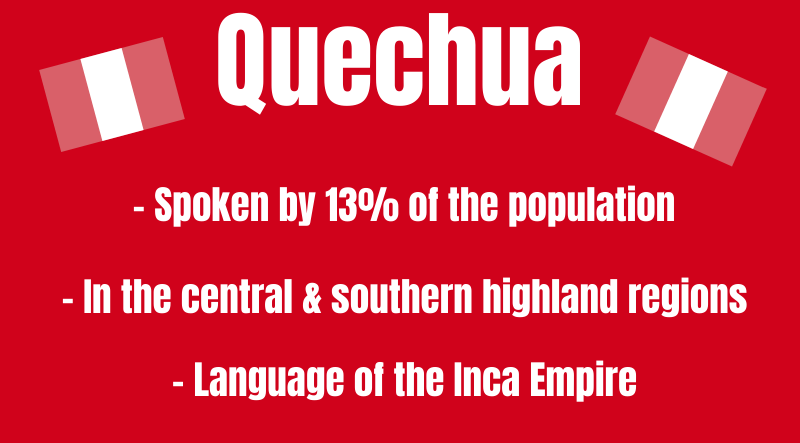 The Quechua language is more like a Quechua family of languages. Some Quechua speakers find it hard to communicate with people from other regions. Always ask your Quechua speaking LEP which specific region (for example Northern Peru, Cusco, Puno, etc.) they are from as an interpreter may not interpret Quechua dialects from all regions.

Aymara is more frequently spoken in Bolivia, it’s important when hiring an interpreter that the interpreter is aware that the LEP is from Peru as regional differences in language may exist. Other languages are spoken in the region, like Jaqaru and Kawki, but the numbers of speakers are really low and unlikely to encounter.

So your LEP is from the Amazon Region?

All the indigenous languages from this region have only about 105,000 speakers combined. The most common are:

Keep in mind that an LEP from, for example, Loreto could speak one of dozens of languages from one of the 5 identified families.

Due to the great difficulty in identifying languages and dialects from this region, it is best to reach out to us as early as possible to narrow down an interpreter that will work for you and your LEP client.

But do not let the rarity of the language dissuade
you from reaching out!

Many of our interpreters of indigenous languages work within multiple languages and dialects!