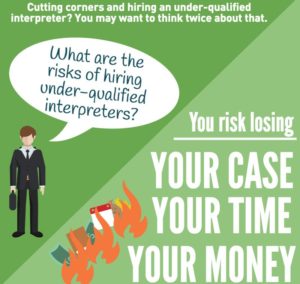 The differences between a bilingual and an interpreter… and the hidden costs of using underqualified interpreters.

Language learning is a lifetime long process. It takes work and commitment to developing specialized vocabulary and understanding of linguistic nuances in two or more distinct languages. What distinguishes a linguist from a bilingual are the hours of study, courses, and practice that a professional interpreter dedicates to mastering their craft. Speaking a second language does not make you an interpreter the same way as taking an anatomy class does not make you a medical doctor.

Would you risk your client’s case to save a few bucks on the interpreting bill? In the case of Willie Ramirez, an 18-year-old who became quadriplegic due to an interpreting error, a misunderstanding of a cognate, or so-called “false friends” (the Spanish “intoxicado” and English “intoxicated”), by an untrained bilingual cost him the partial use of his limbs and the misdiagnosis cost the hospital $71,000,000.

Additionally, using an under-qualified interpreter can open up your case to challenges and appeals. In United States v. Bailon-Santana, a divided panel reversed a conviction based on an invalid jury trial waiver form which was printed only in English, signed by a non-English-speaking defendant, and translated by his defense attorney. The court found that an interpreter needs to demonstrate language expertise and interpretation ability in an objective manner which the attorney, who originally translated the statement, was unable to do.

Using under-qualified interpreters runs the same linguistic and legal risks to your case as using a bilingual. Court interpreters are highly trained and undergo background checks and complex testing, including knowledge of ethics governing the profession. Many non-legal interpreting settings aren’t governed by the same formal rules and regulations where, for example, medical interpreters may also serve, in a limited capacity, as the LEP’s advocate. A behavior that may have serious consequences to the integrity of your legal case.