When scheduling interpreters it’s easy to assume the language of the speaker based on the country of origin. If your client is from Mexico, Bolivia, Argentina, or Peru it’s tempting to order a Spanish interpreter, especially if the client speaks Spanish during initial interactions. But reality isn’t as simple.

South and Central America contain a plethora of indigenous languages, many which are still is use today! In South America alone there are more than 370 identified languages! With another 21 Mayan languages used in Central America. In addition, other European languages are spoken, like Dutch in Suriname, French in French Guiana (still a region of France), and Romani in Colombia.

Aside from Spanish, most common languages spoken are: 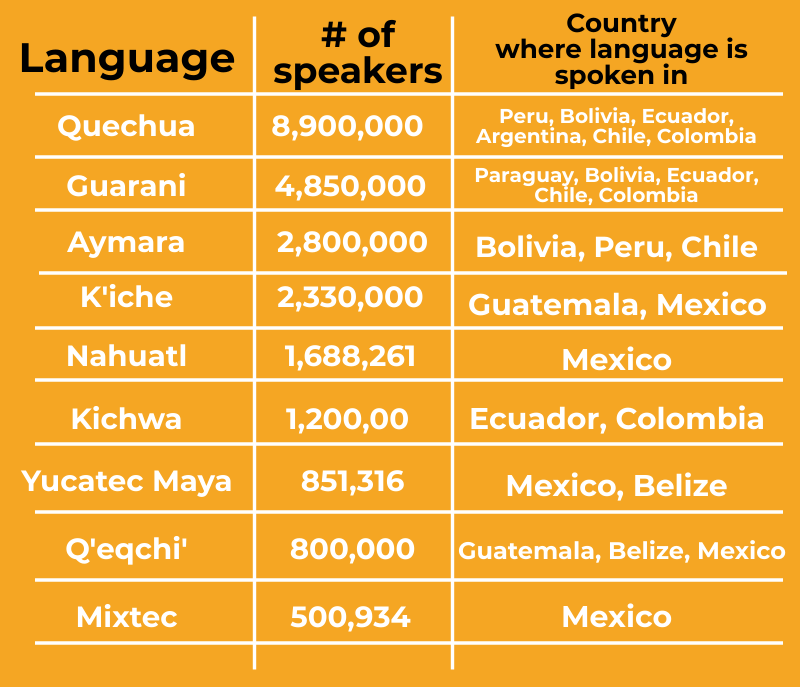 Many do speak Spanish! But some are monolingual, like some 300,000 K’iche’ speakers. There are also entire regions where indigenous language speakers make up a majority, like Apurimac in Peru, where Quechua is learned as a first language by 70% of the population, and only 29% of those speakers learn Spanish as a second language. So some may feel more comfortable communicating in the indigenous language rather than Spanish, even if they are bilingual.

How is this relevant to YOU?

Almost 22% of the U.S. population speaks another language at home. In 2017, 8% of immigrants (about 3.5 million people) came from Central America while about 7% (3.2 million people) immigrated from South America into the U.S. Many of them are speakers of indigenous languages as civil wars in El Salvador, Guatemala, and Nicaragua and the unrest in Venezuela caused an influx of people immigrating. Additionally, over 14% of those immigrating came from Peru, one of the most linguistically diverse countries with a high percentage of indigenous language speakers.

Clear communication is key to any case, whether a client/attorney meeting, deposition, or in court. The subject matter can be difficult, sometimes technical, and the LEP must understand the questions first then respond in a clear and accurate manner. The language used can affect accuracy of testimony and, therefore, the outcome of your case!!

There are also cultural considerations! Indigenous language interpreters will be able to serve as a liaison to the culture where the vocabulary for certain concepts may not exist. For example, the Amazonian Amondawa tribe do not see time as independent of events. As for an example in a more commonly spoken language, there are no words for “thank you” in Quechua, they thank others through actions only. An indigenous language interpreter would also be experienced in navigating the cultural differences and bridging the gap.

We have indigenous language interpreters in a variety of languages available.